We’ve already discussed some of the best, yet affordable angle grinders to start off with, but it’s time to specialize a little bit. Often, you’ll find yourself working in places without a convenient power outlet. Maybe you’ll just be working outside and can’t be bothered to carry any extra equipment with you.

There’s no need to look any further as we’ve gathered a list of cordless angle grinders capable of solving exactly those problems. Worrying about a power source will pretty much become a thing of the past. Remember though, most of the time you’ll only be paying for an angle grinder without any accessories. This includes any blades, add-ons and in the case of cordless angle grinders, even batteries. These will often be called Bare Tools so keep an eye out.

So, if you’re going to be ordering an angle grinder, don’t hope to start cutting the moment it arrives at your doorstep unless you also ordered all the necessary equipment along with it. 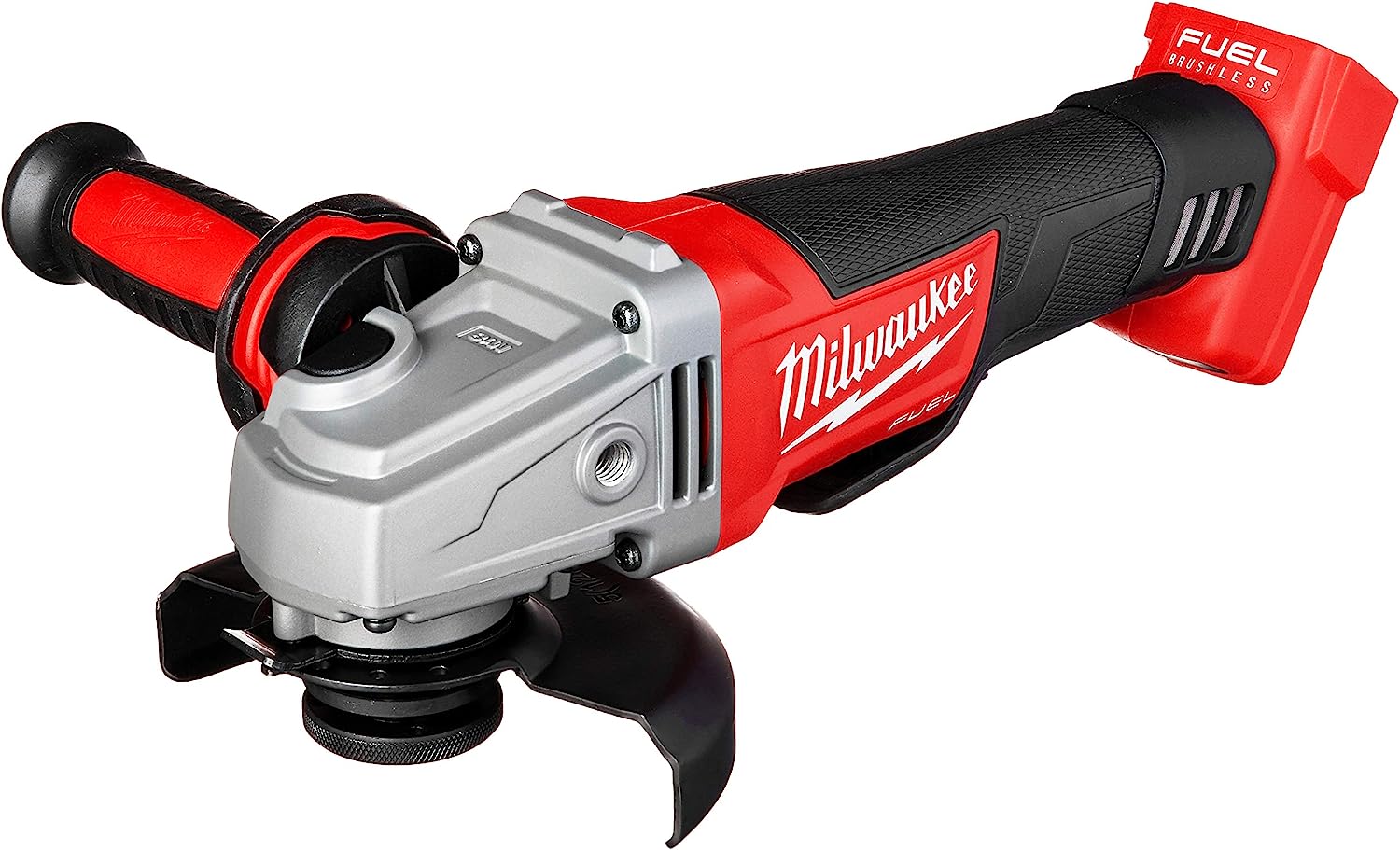 This on’s a bare tool, coming without a battery but offers all the basic features you’ll be looking for in an angle grinder. A guard to protect you from debris that’s completely tool-free, so replacing or moving it won’t be a hassle. The handle can be taken out and placed in a total of three different positions, giving you complete control under all circumstances.

As if we’ve already discussed in the past, the ability to attach the handle to the top of your angle grinder is something that not all manufacturers will offer you. But it’s still one of those quality-of-life situations where it’s better to have the option to do something even if you’re very unlikely to get in a situation to do so.

Milwaukee’s angle grinder also features a paddle trigger, an easily replaceable battery and the ability to work on various materials. As long as you remember to use the appropriate cutting tools and avoid doing a ton of heavy-duty work, you shouldn’t run into any problems. 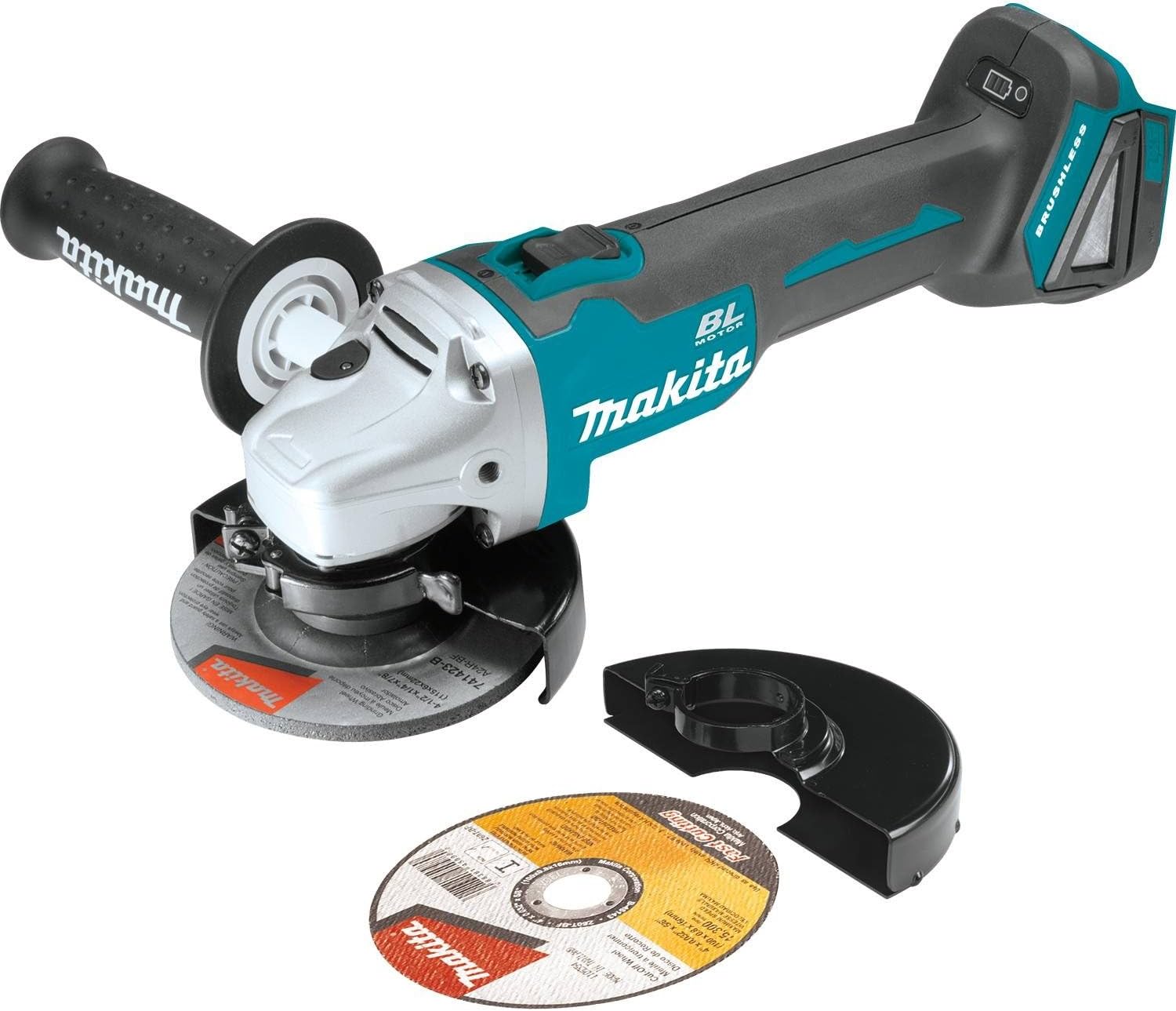 Similar to our last one, remember to order all the essentials along with it, especially the battery. Unfortunately, you don’t get the luxury of being able to attach your handle to the top of this angle grinder. For most people, however, that’s not a deal-breaker as the situations when you’ll need to attach it in such a position are quite rare.

On the other hand, Makita’s angle grinder adds a lot of other features, being brushless is just the beginning of ensuring a long-lasting tool. As it not only reduces the heat generated due to friction, it also gets rid of the energy losses due to it.

The motor also features automatic speed change. Optimizing and changing the speed depending on what the job at hand requires, this feature is more than just for convenience though. Speed management has done well, combined with a brushless motor means that you’ll be maximizing efficiency through more than a single optimization. 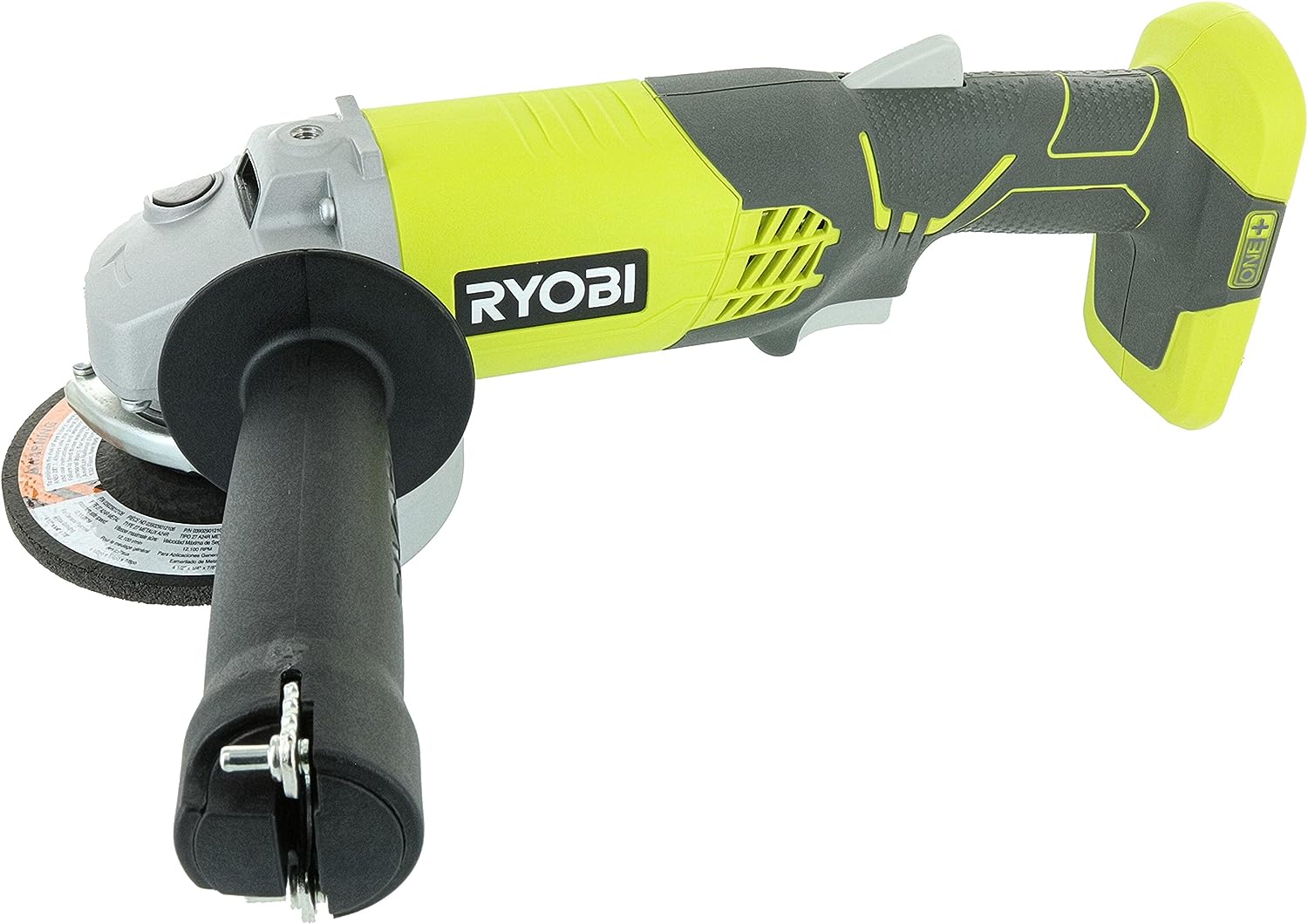 Quality of life is still a major selling factor for angle grinders and this one by Ryobi doesn’t compromise on it at all. The handle can be placed in three different locations giving you complete freedom to use your power tool as you see fit.

This Ryobi angle grinder also comes with a grinding wheel, so you can get going as soon as possible.

Unfortunately, as far as longevity and efficiency are concerned, this one falls short as the lack of a brushless motor makes it relatively weak in comparison to other angle grinders we’ve dealt with in the past.

Perhaps the most important part of an angle grinder is its ability to continually perform for long periods of time without significant wear-and-tear. In these situations, a brushless angle grinder would be phenomenal as it would not only promise minimal friction but can also operate at relatively long intervals. 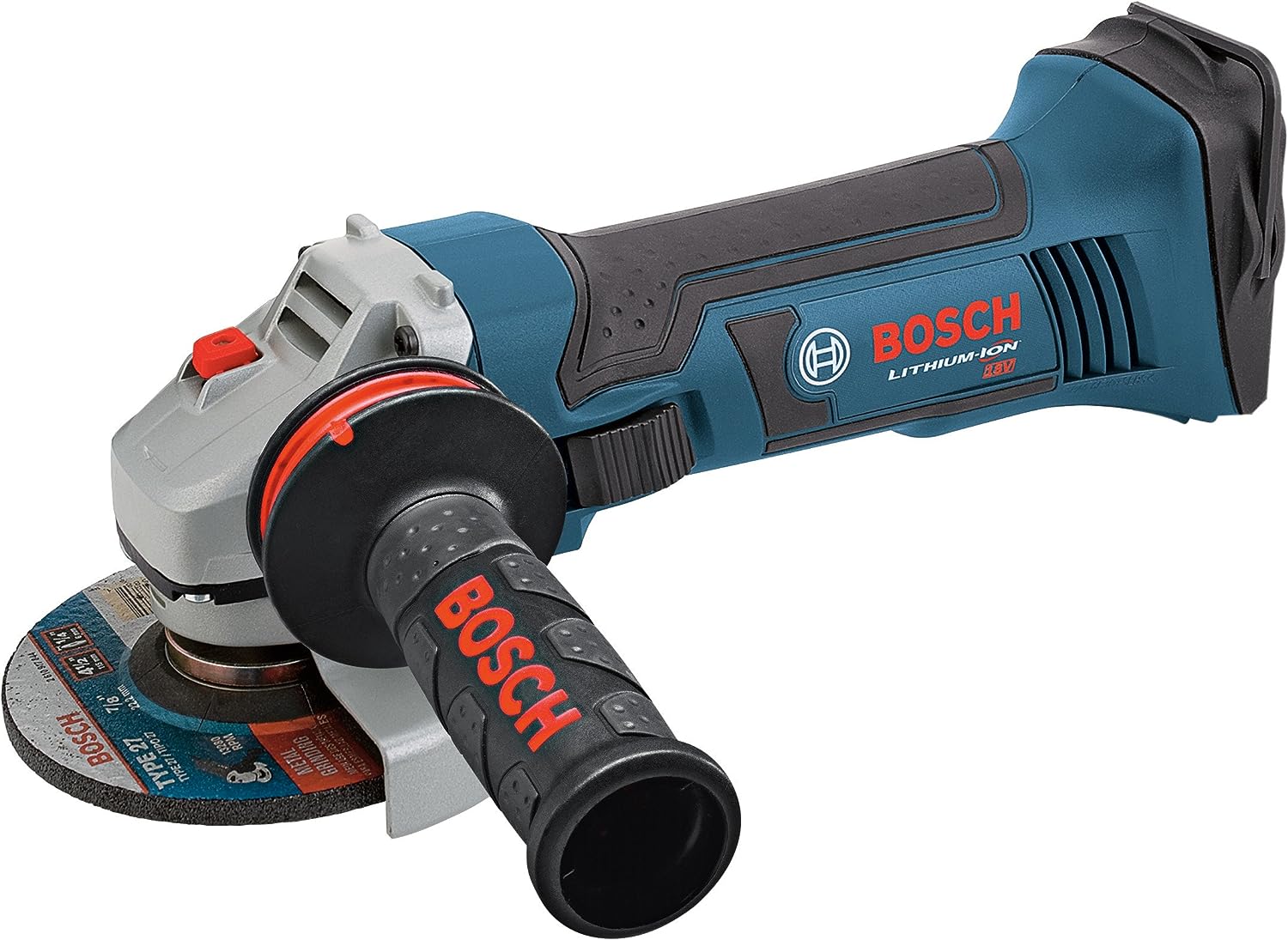 This is as good a time as any to remind you that pretty much all budget angle grinders on the market won’t be coming with a lot of additional tools or accessories. Whether it be a toolbox, a battery, additional grinding wheels or a cutting disc. You’ll need to be purchasing all of this equipment yourself so it’s definitely a good idea to make yourself familiar with the various accessories available if you’re not experienced with angle grinders.

This Bosch angle grinder has a two-position handle as well as restart protection meaning that if the power gets toggled while your tool’s in the “On” configuration, it won’t start grinding out on your table or the floor, potentially shattering the cutting disc and injuring nearby people.

As far as battery life goes, users have reported various operating times depending on the material that you’re operating the tool on, but you should probably expect around 15 to 20 minutes of operation from angle grinders around this budget.

On the other hand, a brushless motor means that it’ll last longer than pretty much every alternative out there which uses a bush. So, if you’re looking for a recommendation then DeWalt is a clear winner.

Compared to ones that work on any AC or DC supply, battery-based ones will almost always be weaker. This is clear because, with the current level of technology, we’re simply not able to store energy as densely and efficiently to make portable batteries for heavy work tools. That doesn’t mean these tools won’t do the job you purchase them for.

Just remember that you’ll only be doing max thirty or so minutes of work at a time with a single battery while using most of these angle grinders.

Brushless vs Brush Based

Brushes are an outdated piece of technology, but they still function perfectly fine. They’re purely outdated because there are alternatives now that can completely nullify the drawbacks which were caused by using brushes in motors.

Having a brush in your machine is basically akin to having a countdown timer to when it will stop functioning, as over time the brushes get damaged due to friction and heat. Yes, brushes can be replaced, but you’ll have to do some research and be able to get a replacement pair of brushes before even thinking of fixing the problem yourself.

For most people, it’s simply better to purchase a new angle grinder at that point.

Safety and Quality of Life Features

Over the course of technological advancement, there have been several modifications and additions to standard angle grinder designs, changes which have become market standard. To list a few:

When you’re purchasing angle grinders you might not think much of safety fail-safes such as the paddle switch release but at the end of the day, spending a small amount of extra money just to potentially avoid a permanent injury is something that you should never compromise on.

We will be happy to hear your thoughts

generalcompression.com is a participant in the Amazon Services LLC Associates Program, an affiliate advertising program designed to provide a means for sites to earn advertising fees by advertising and linking to Amazon.com. As an Amazon Associate we earn from qualifying purchases. Additionally, generalcompression.com participates in various other affiliate programs, and we sometimes get a commission through purchases made through our links. Amazon and the Amazon logo are trademarks of Amazon.com, Inc., or its affiliates. We do not specifically market to children under 13.